Welcome at our lab page!

Fertility in mammals is ultimately governed by the fertilizing ability of both the spermatozoa & the oocytes. The scientific opinions (and evidences) on the question of “what makes the uniting gametes most competent to participate in the process of successful fertilization” still remain vexed. Emerging evidences hint that it may not be a mere accidental phenomenon but the sequence of events governed by specific genes/ set of genes eventually determine which out of millions of gametes become lucky  of producing a healthy offspring.

Ever-increasing expectations from animals to produce more milk, through selection and planned breeding, have resulted in huge improvement of animal productivity with concomitant reduction of fertility. A commercially viable dairy system on the other hand demands the animals to maintain their fertility at optimum & conceive within a short time after the last calving. For achieving this target the ova it sheds during ovulation & the sperm that is used for breeding should be of sound physiological competence. The research at our lab is primarily focused at improving our understanding on the mechanisms/ determinants which make an oocyte and spermatozoa better equipped to perform their job than the rest. Taking buffaloes as the model species we worked before to delineate the detail chronology of oocyte maturation and dissecting the molecular cross talk between the oocytes and surrounding cumulus cells. The detail architecture of GDF9 transcripts in buffalo and their unique promoter elements were reported by our lab for the first time. Possible epigenetic control of GDF9 expression in oocyte specific expression was elucidated. Stimulating buffalo oocytes with recombinantly produced buffalo GDF9 resulted in marked enhancement of their blastocyst development potential. We hypothesize that it should be possible to impart artificial competence to oocytes and thus making them more robust by simple noninvasive tickling of their promoter elements. This could translate into an effective fertility augmentation technology for this species which is known to suffer for several reproduction shortcomings in spite of being a superb dairy producer.

Discovering the complete repertoire of transcripts expressed in oocytes is still an open chapter. We have reported a bunch of exclusively oocyte expressed transcripts, so far unknown, which could play potentially important role in determining oocyte competence. Many of these qualify to be non-coding RNAs which display differential abundance pattern in ‘good’ vs. ‘bad’ oocytes. We remain curious to know further about their role in oocyte function and imparting development competence to resultant embryos.

Genomic analysis of spermatozoa and exploring the sperm membrane proteins in the new interest of our lab. We hypothesize that the genomic & epigenomic carriage of spermatozoa play crucial role in not only determining their fertilization potential but the health of resultant embryos also. We have reported a list of developmentally important genes which display distinctly differential pattern of DNA methylation and histone modifications in spermatozoa from ‘high’ and ‘low’ fertile bulls. Tracking the role of these genes in the course of spermatogenesis and post fertilization embryonic environment will help us in deciphering male fertility markers and screening semen for optimum fertility. Similarly we work on the phenomena of sperm surface remodeling which can help in better immune tolerance of spermatozoa in FRT along with making them able to undertake oviductal reservoir formation & interacting with oocytes. A more clear delineation of these events can help to improve the fertility of bulls & help achieve optimum pregnancy rates using lesser number of sperms. 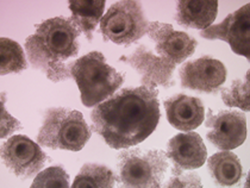